My online presence isn't limited to this blog. In fact, it's quite extensive, and has only been growing since that archaic linked post. My biggest platform, though, is Quora. 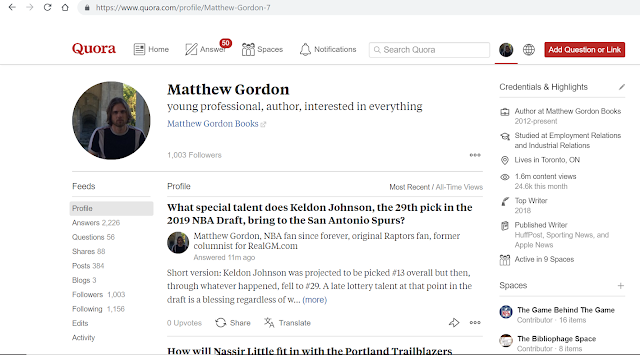 Complete with 2014 profile picture, NBA answers, and various facts about me.

In the spirit of my extremely occasional posts on here about apps I've downloaded, a few months ago I downloaded an app called Spark. In short, it's a text-based game that requires you, a single-celled organism, to build as much influence as you can through exploiting the resources Matter, Energy, Structure, Time, Space and Spirit. The resources double, triple or more in value when you spend influence to amass them, and you also gain knowledge that carries forward each time you destroy the universe.

Along your spark's journey to mastery, there are Evolutions. Intelligence, Consciousness, Purpose, Nebulae, Star Formation, and so on lead you to greatness.

The Spark Wiki explains the app at least as well as I can:

Spark is an Idle game that was both developed and published by Deuski Games. In Spark, you take on the role of a Spark of Life that suddenly pops into existence and begins to blindly accumulate Matter into itself, thereby growing its influence on the Cosmos. The gameplay of Spark is in the classic style of idle games, where the user interface consists solely of buttons, progress bars, and timers. The game begins as simply as possible, with only one Resource (Matter) available to you, but you will quickly be prompted to swipe left to the Evolution page, where permanent improvements can be unlocked, which include more resources, auto-incrementing (even while the app is closed), an additional Upgrades menu, a reset mechanic, and more! The goal of the game is to amass as much Influence as possible and build the Cosmos in your own image!

The Wiki contains sections on most of the app's major functions, such as the aforementioned Resources, Upgrades, Evolutions, Universe Destruction, and Knowledge.

Spark has a special feature called Epochal Moments. They occur due to total influence acquired over the life of the game, meaning spending influence on upgrades does not affect when they occur. These Epochal Moments also make the game even more science fiction than it already sounds.

For fans of Spark, or for those seriously considering playing, here is the full list of Epochal Moments, which I transcribed during a GO train ride:

You exist. You are not aware that you exist because you are not aware. Instinctively, you draw nearby particulate matter to yourself. You synthesize it, and your influence begins to grow.

You gather more matter to yourself, and you begin to do so more efficiently. The more influence you obtain, the more complex you become, and the quicker you grow.

The patterns within you grow ever more complex, loops within loops. They blend and meld into one another. As the biggest and most complex of the systems envelops the others, you experience your first thought: “I am”.

As your influence grows, a voice reaches into your thoughts. It suggests you heed the wisdom of those who came before you.

Your influences grows without bound, yet you feel increasingly adrift. You reach out to the space around you and begin to organize; stars, planets, and galaxies form., and though all you see is good, you do not feel satisfied.

As you drift through the cosmos, you notice one planet among billions that is covered in strange molecules, more complex and more varied than you have seen before. They have no Spark, no life, but nevertheless you take special watch of this planet as the eons creep by.

Upon barren rocks patterns begin to take form. Small at first they grow more numerous and more intricate; some fall by the wayside while others grow ever larger in the slow unconquerable process of evolution, guided by your hand.

You find the individual cells grow faster when they band together as a single unit. Over countless eons they specialize and change until none can survive isolated from the others.

After eons of painstaking incremental change, the life you have created and nurtured experiences its first taste of self-awareness. Consciousness at long last has been given physical form.

The conscious life you have created takes its first cautious steps out of infancy. It learns and adapts to its surroundings at a rate that has never been seen before as the individuals teach themselves to craft tools and pass that information across generations.

The life you have created expands and builds great societies as this world has never before known. They craft ever more impressive machines, they wage war, they look out and ponder, and they continue to grow.

The life you have created is not content to be confined to the planet it was born on. Though tentative at first, the species begins to leave on shuttles of their own design and populate other worlds.

The life you have nurtured for so long travels and colonizes other worlds. Occasionally they meet others that are like themselves. They share technology and history, and learn from one another. The petty wars that plagued their past are now a distant memory. You look upon them and are pleased.

Conscious life spreads rapidly throughout the Cosmos, building an astounding society that spans galaxies. Their technology continues to improve, each individual now has power that would have had them considered a god in previous eras. You watch as they continue to expand.

The conscious life grows ever more introspective even as it continues to expand. Their understanding of the Cosmos is unparalleled, but they still marvel at why they exist, and wonder what could be their purpose. In the back of their minds they mull over this question and continue to expand.

The conscious life, these sapiens, realize they cannot be bound to their forms forever. Like all things physical, their bodies will begin to decay. The brightest among them will gather together, and begin to work on a solution.

The life you have created has devised a way to shed their physical form; all at once they leave their plane and join as one, a being not unlike yourself, though it is a mere shade compared to your current form. You craft a universe in which it can dwell. It instinctively reaches out and its influence begins to grow.

These new, more intelligent beings form tightly knit packs, and they are capable of organizing and communicating commands more complex than any of their ancestors. Though the accomplishment is great, their minds are still not in your image; they are incapable of self-reflection.

The life continues to fill the many niches present in the planet, and the simple presence of life creates new niches that are then filled by new organisms that would never have been possible in the earlier days of this wondrous experiment.

The Great Societies of these sapient beings have grown powerful enough to destroy their world many times over. Tension fills the hearts and minds of every one of the planet’s inhabitants, and though they may be on the brink of self-extinction, they continue with their lives and continue to grow.

The beings have reconciled with each other, and have formed a unified society that is no longer beholden to the boundaries of the past. Their resources are plentiful, and as their understanding of their place in the Cosmos continues to grow, they begin to look at the stars.

A vast and wonderful variety of life now populates the planet you came to all those ages ago. Anywhere it is possible to survive, something finds a way to do it. Some of the life sustains itself from the energy of the nearby star, others live by consuming that life while avoiding being consumed by others. The pressure to survive continually pushes these creatures to adapt and change, and many among them grow ever more complex.

In the struggle to survive, new strategies emerge. Creatures dart and dodge, outsmarting would-be predators. Their intelligence increases, and though the energy demands of larger brains are great, the ability to synthesize and react to new information ensures their survival. You grow vested in these creatures and begin to guide their evolution, cultivating their mental abilities.

Weird fact about the above: all 23 Epochal Moments combine to equal exactly 975 words. If there's an under 1,000 word transcription contest out there focusing on intergalactic apps, this has to win.

Thoughts on this version of how the universe progresses?
Posted by Matthew Gordon at 3:26 AM No comments:

A Timeline of a Norwegian Town's Lack of Time

If you've been following Norwegian clock news lately, surely, you've encountered one northern Norwegian man's quest to abolish time. His town is enamored with the idea, and now it's apparently being tabled - less than two days after his proposal made international news. For a group of people opposed to living life by the clock, this is awfully fast.

June 20, 7:04PM GMT: The Norwegian island that abolished time: 'you can cut the lawn at 4am' -The Guardian

The progression in the titles from these outlets is astounding. From one inspiring man, to wanting to abolish time, to campaigning for it, to apparently having abolished it in the past tense (the Guardian article mentions an upcoming vote, though).

The gist of the time abolition campaign is in two key paragraphs of the Post article above:

Time also passes slowly in the Arctic Ocean, off the northern coast of Norway, when you are floating on a small boat under the bright evening sun, which is where the National Post on Monday reached Kjell Ove Hveding, a retired businessman who is actively working to abolish time in his home town of Sommaroy, a little fishing village of 300 souls. [The Guardian article above places the population at 350 and places the slash in the second O of Sommarøy.]

Stores will open when the staff is there, and close at other times. Schools will be flexible. Deadlines will be negotiable. Restaurant reservations will be tricky to manage, but tourists will be encouraged to move at their own pace. Importantly, there will be no clocks. Already, a poignant tribute of abandoned watches has spontaneously appeared on the railing of a local bridge.

For what seems so simple (think of any time you've been in a shower or bath on a weekend and lost track of time), it's so multi-layered:


The idea is admirable. However, I've already identified a few problems:


I'd love to visit a place without time for a week or so. Should I instead visit until I feel like leaving?
Posted by Matthew Gordon at 8:50 PM No comments: