[Bang2Write] 3 Important Beta Readers You Just Have to Impress

After writing, before publication, people will read your writing.

Who reads? Beta readers, that's who.

These people help get your work ready for editors, ready for publishers, and ready for the market.

You need at least types of them, and I explain that on Bang2Write:

3 Important Beta Readers You Just Have To Impress

Published authors, subject-matter experts, and target readers will get you where you want to go.
Posted by Matthew Gordon at 2:26 PM No comments:

Jess Brewer: "Yes You Can!"

This past weekend, University of British Columbia Professor Emeritus Jess Brewer posted "Yes You Can!" on his blog. In 850 words, he said more than most people do all day.

This mindset is the best to have.

Amidst his examples of his increasing age, the health problems people face, and those tired worn, excuses that stop people from reaching their dreams, there's this thesis:

Shall I run through an inventory of excuses?  No, that would be both mean and pointless.  Deep in your heart you know what actually prevents you from Doing It (whatever It might be for you) and what is just an excuse, doubtless backed up by a firmly entrenched stereotype.


It can be anything. It can be travelling to a new place, working on a new project, or meeting someone new. There are so many ways to build in a belief that you can't, it's easy to forget that you can.

There's also a surprise at the end, but I'm not going to spoil his blog entry for you, now am I?

What's nice, too, is none of this is coming from a motivational speaker. It's coming from someone who's put in decades of hard work - and loved doing it.
Posted by Matthew Gordon at 5:26 AM No comments:

Rutger Bregman's Utopia for Realists advances the not overly bold, but very boldly stated, idea that we live in utopia. It starts out as advocacy for universal basic income (UBI) but then morphs into a longer, more thorough, tract advocating for all kinds of things. Career changes, robots, open borders... if it exists, Bregman probably has an opinion on it. This is great.

Bregman's arguments for UBI come less from a charitable or moral standpoint - i.e. nowhere near Pope Francis's "moral economy" - but from a money-driven, practical standpoint. Bregman appears extremely socialist at times, such as when he bemoans the United States's falling life expectancy while remarking that "the market and commercial interests are enjoying free reign". (23) However, his vision of UBI comes off as conservative. This is for three key reasons:


That's a good theory. Practice may be more difficult, though, especially in large countries like Canada or the United States. Bregman's native Netherlands is, at least on the surface, a particularly good candidate for UBI because it's so small. One euro will take you about as far in Amsterdam as in Rotterdam as in Delft. What about in Regina versus Toronto, though, or in Bismarck, ND versus New York City? In large countries, UBI would either have to (A) be cost of living adjusted based on where the recipient lives, or (B) be the exact same in nominal terms. If we choose (A), how is someone from a small town ever supposed to be able to afford to move to a large city? If we choose (B), money will drain from high-COL areas to low-COL areas. Bregman never answers that question, possibly because his country's geography never asks that of him.

Where Bregman is flat-out wrong is in his demonization* of professional services. Everyone from an HR manager (143) to a lawyer (145) to a banker (147) is "bullshit" and "useless" to him. These three are particularly good examples of professionals who facilitate and grow the occupations Bregman values more. Bregman loves teachers, for example. Without HR managers to staff and compensate them, lawyers to negotiate their union contracts, and bankers to underwrite the funds that help build the schools, teachers would have a far more difficult time. These three professions also have a variety of conferences, seminars and events that promote - this'll sting for Bregman - education. Not everyone who seeks out graduate school or who wants to carry on the world's knowledge wants to do it within a university setting.

It's the same for small businesses, a group that could arguably benefit radically from UBI. (60) HR consultants can use their industry knowledge to find good employees, reducing turnover costs. Corporate law can be what stops a small business owner from losing his or her house in a lawsuit. Bankers can provide loans at discounted rates that, in the end, result in the banker making a cut while the business owner makes even more. I wouldn't rather have those people taking up all their time with, as Bregman quotes Benjamin Franklin, "leisure and pleasure". (34) Bregman's hatred of the 70-hour workweek (34) is laudable, but he may be going a smidgen too far in the other direction.

Recommending non-fiction is different from recommending fiction. Whereas in fiction, many people like to delve as deep as they can into a particular genre, any non-fiction field should be enjoyed in its entirety. Or would you read a dozen books about French military history without reading any on French political history, French social history, or the military history of the neighbouring nations?

That said, Bregman is establishing himself as a Dutch Slavoj Zizek of sorts: a European academic who is mostly far-left but doesn't feel constrained by other peoples' ideological boundaries, and who will stop at nothing to advance an entertaining view of the world. If you like politics, and aren't afraid to have your beliefs challenged, Utopia for Realists is for you. Bregman puts this best in his quotation of Lyman Tower Sargent, who Bregman casts as a "leading utopia expert": "One needs to be able to believe passionately and also be able to see the absurdity of one’s own beliefs and laugh at them". (28) Neither I nor Bregman is unknowing of the absurd.

My favourite part of Utopia for Realists is the conclusion. Seeing as I don't particularly consider it possible to give spoilers for non-fiction books, here are the last two sentences:


Ideas, however outrageous, have changed the world, and they will again. “Indeed,” wrote Keynes, “the world is ruled by little else.” (207)

No matter whether you're on the right, the left, or somewhere completely removed from any political spectrum. These last two sentences are something any reader can believe.

*A fitting word, considering I'll be posting about The Screwtape Letters this month. Not to compare them to this book, thankfully.
Posted by Matthew Gordon at 5:55 AM No comments:

They went to the Final Four.

Now their women's team has won it all on the same stage.

For the first time in school history, the Gamecocks women's team has won it all.

I didn't pick them, but hey - I should have.

I still have Gonzaga in the men's final, but in the meantime, let's celebrate the team that really got it done: 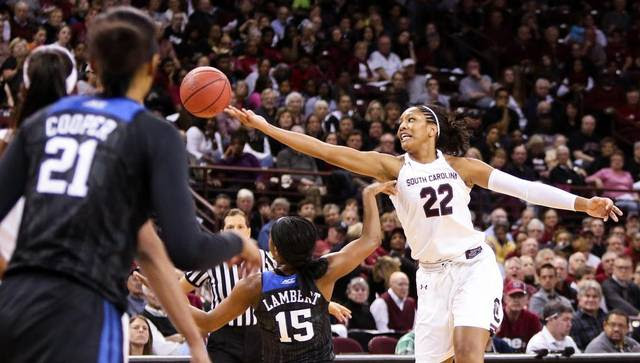 Congrats, Gamecocks! You've sure scored a hell of lot more points can I could have.


Posted by Matthew Gordon at 9:08 PM No comments: