The title of this book is a little misleading. The subtitle, An Alternative History of American Popular Music, is a little more accurate. Nonetheless, Wald tells a gripping tale of the mainstream in American music from approximately 1895-1970, with an emphasis on the importance of live music and of race. The last chapter's take on the British Invasion of the 1960s is what gives the book its title.

As with any book that tries to make a point, How the Beatles Destroyed Rock 'N' Roll is open about its biases. Wald focuses on the recorded music market, which led to everything from studio production innovation to an artistic shift away from standards. As Wald puts it, "Records and radio separated sound from visual presentation and particular situations, and attached names to the music." (96) This began with the painstaking 1890s process of having a musician record each copy separately, which understandably had the effect of deterring the best performers from recording. (87) It eventually led to artists spending more time in the studio than on the road, culminating with the Beatles selling number-one albums despite not touring toward the end of their career.

Wald also takes the focus away from the usual set of critical darlings: "Once again, we have to consider not just the extraordinary bands and dancers but the ordinary desires of people who had just finished a hard day at work and wanted to relax and enjoy themselves." (109) While icons like Charlie Parker and Miles Davis are beloved by fellow musicians to this day, neither charted or sold nearly as well as extremely uncool stalwarts like Pat Boone. When considering what most people actually listen to on a day-to-day basis, which was the radio then and is various media now, it simply has to be accepted that the most talented musicians weren't necessarily the most notorious. Besides, Wald notes, the greats have had their stories told so many times one could look back and see the period from 1895-1970 as being far more about legends than it actually was. During the jazz era, one interview Wald cites shows many people did not even care who they were listening to as long as the music was good for dancing. (98)

Wald's sections on Paul Whiteman and Bix Beiderbecke are especially detailed. I knew basically nothing about either. Whiteman's impact on the musical mainstream of the 1920s appears massive from Wald's perspective, and his combination of classical and jazz music ("jazz classique" in Whiteman's own words) sounds fun. That someone known as "The King of Jazz" in his time should be so little discussed today, even when other jazz musicians are lauded, speaks to how music ages. Wald makes the apt point that underground artists are often easier to like for later generations because they sound less emblematic of their time. Beiderbecke, sadly, is in part known for dying at the age of 28, possibly due to complications from alcohol withdrawal. As a trumpet player who turns 28 this summer and has had a drink or two before, this thought terrifies me.

The book has an uneasy relationship with race, simultaneously casting most of American popular music as black in origin while also acknowledging its blend of black and white styles. This begins with ragtime, the first popular music genre as we know it today (26). "Scott Joplin saw himself as a classical composer inspired by African rhythms" (29), which is perhaps the best synopsis of American popular music I can imagine. Although Wald rightfully devotes significant space to Joplin, other ragtime artists, about whom relatively little might be known, are virtually absent. An obvious example is Arthur Collins, whose 1899 hit "Hello! Ma Baby" is still recognizable 116 years later, having been covered most famously by Al Jolson and Michigan J. Frog. Wald acknowledges Collins only as half of "the blackface duo Collins and Harlan" (58), serving as a reminder that many historical American artists may be tossed by the wayside for the use of racism in their work. Vess Ossman, a white banjo player who unfortunately also performed some racist material, is mentioned only briefly, although Wald does note his achievements.

This relationship continues into the jazz and rock eras. Wald mentions McKinney's Cotton Pickers as an example of the racial aspect of popular entertainment of the 1920s and '30s; ironically, the band was from Ohio. A particularly bizarre example of how race relations complicated the music industry is the occasional phenomenon of a few 1930s black musicians looking too white and therefore having to wear blackface in order to fit in with their billed-as-black band. (105)

The musical segregation new to the 1960s took me by surprise. I had never thought of American music as being more racially unified before the Civil Rights Act of 1964 than after it, but Wald's case here is compelling. Genres before about 1964 like ragtime and jazz were played by white and black musicians alike. While country was more white and blues was more black, each influenced the other. (168) Wald asserts that genres like the hard rock and heavy metal of the late '60s onward, and the funk and disco of that same period, were where artists played a certain style basically according to race. (244) Even when a black hard rock artist or white disco artist emerged, that artist was either billed like a different race or a curiosity. (249)

Wald is holistic enough in his approach to period and genre, yet focused enough on recorded music and the mainstream, to make this an easy, informative read.

Aside: despite a chapter being entitled "Rock the Joint", Jimmy Preston is mentioned only as a footnote. That's too bad - I would have liked to have read more about the possible inventor of rock 'n' roll. Then again, American popular music is so broad it can never all fit into one book...

Ease of Reading: 8
Educational Content: 8
Posted by Matthew Gordon at 12:49 PM No comments:

Image Macros Replace the Old "Hang in There!" Cat

Remember the "Hang in There!" Cat, so popular in the '70s as an office wall decoration? A fitting message for a lot of people in this economy, don't you think?
Posted by Matthew Gordon at 1:12 PM No comments:

Take a Flamethrower to Stress!

My original work, commissioned in the form of me being asked to put something about stress on a Post-It note with five available colours: 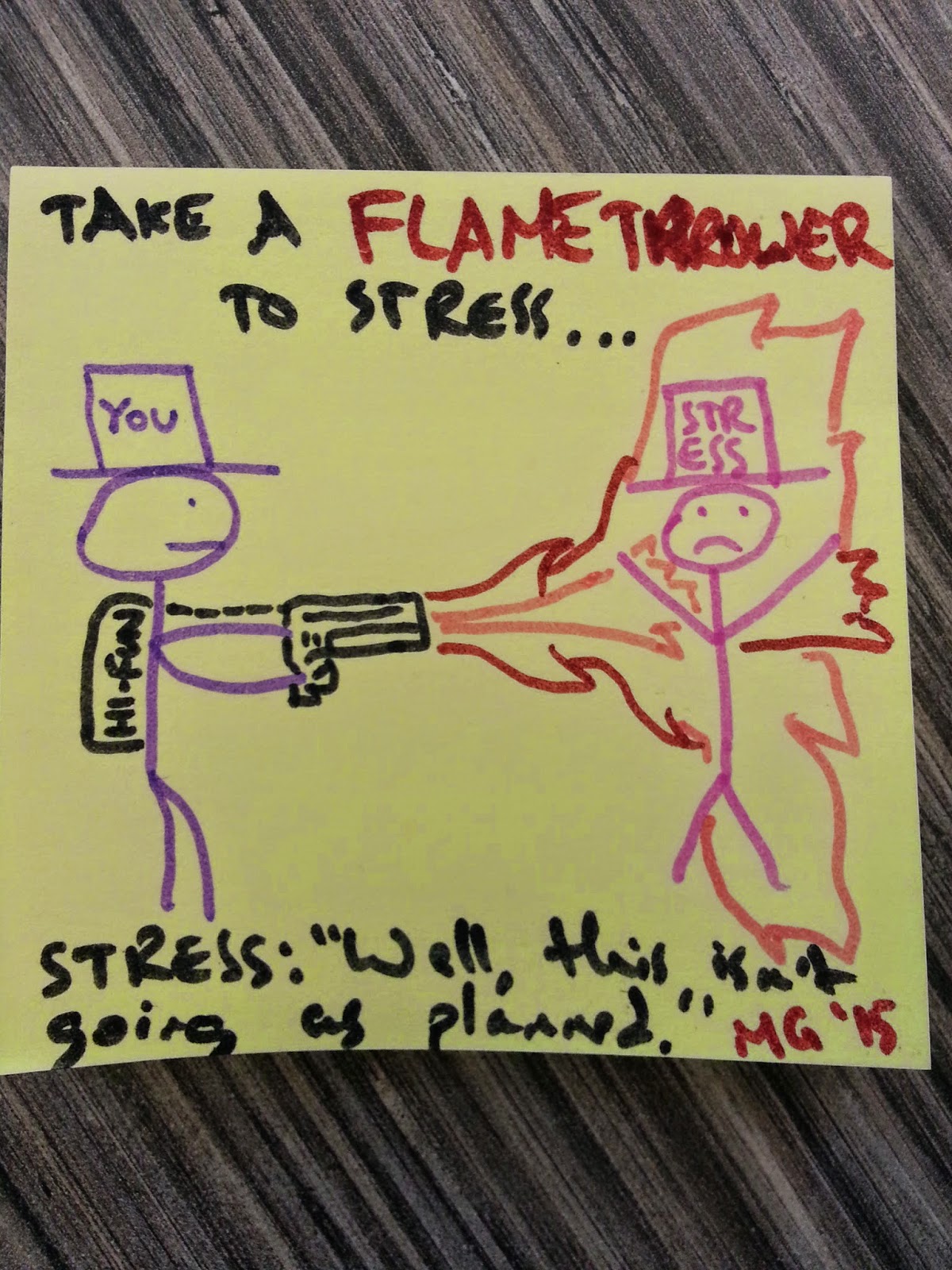 Isn't that a wonderful image to see when you're attending pet therapy? 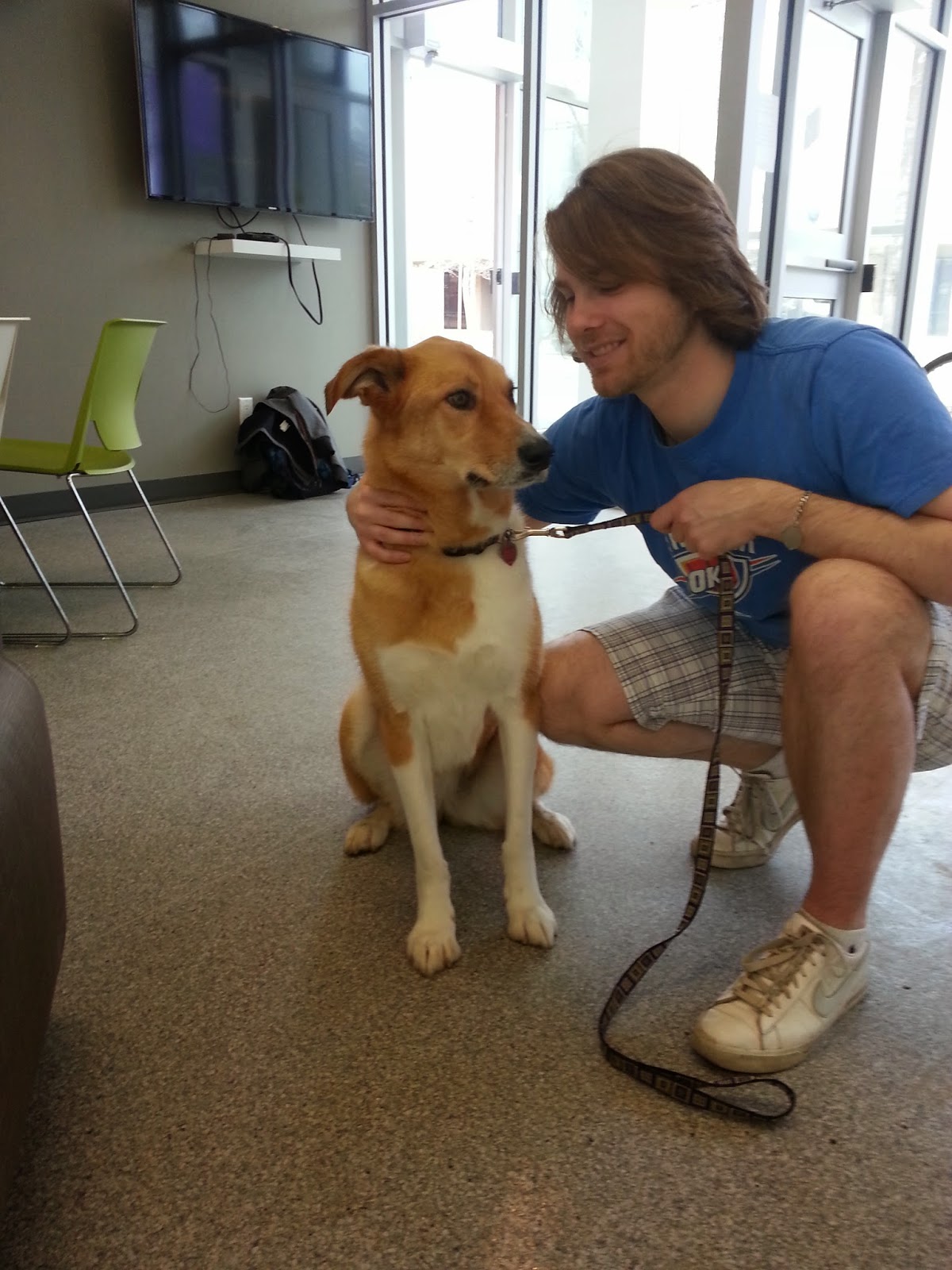 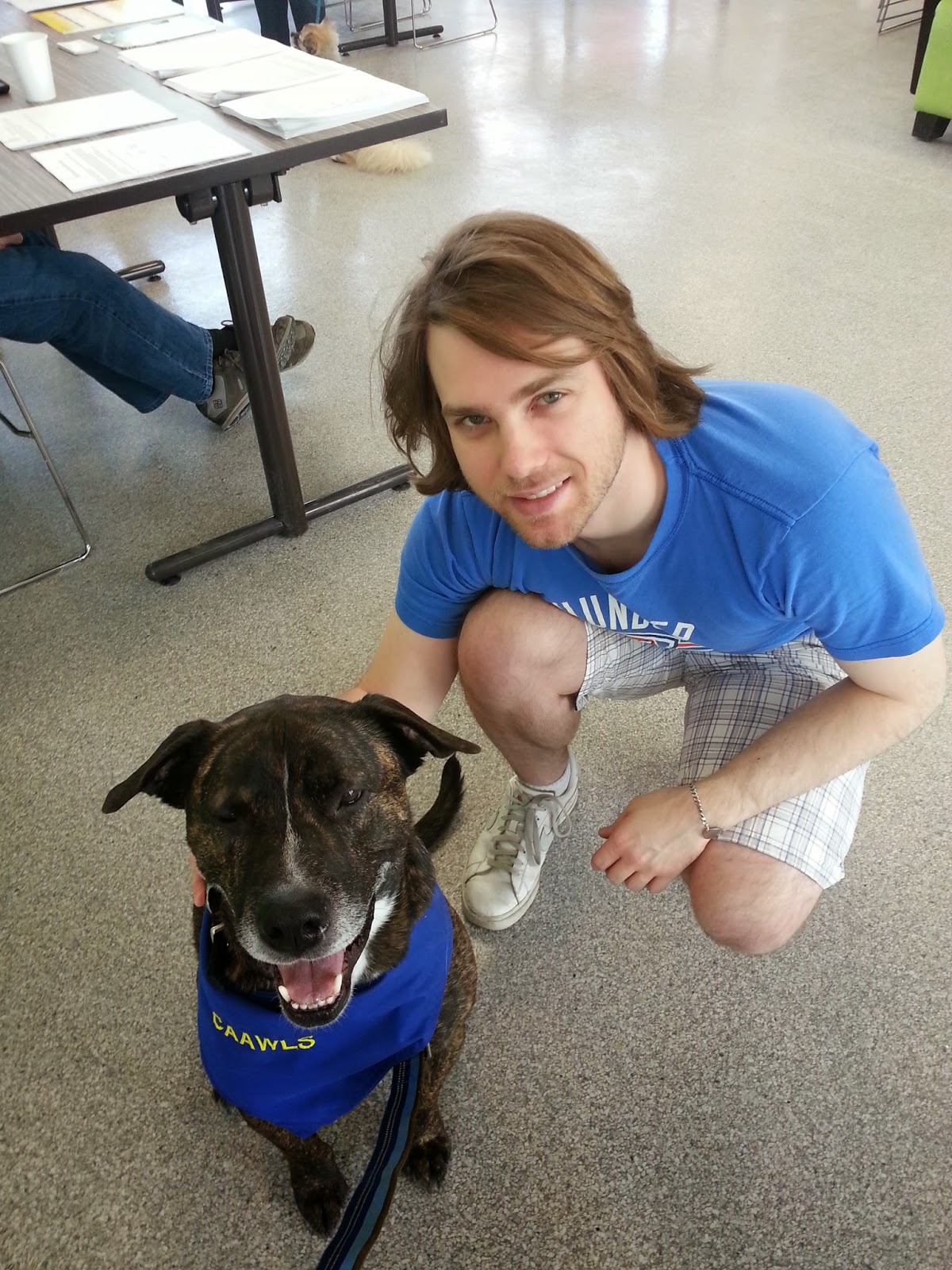 T-shirt and shorts in Edmonton during (still technically) winter mandatory.
Posted by Matthew Gordon at 5:46 PM No comments:

Yesterday, I had the opportunity to see Kyle Beal's Funtown at the Art Gallery of Alberta. It is a set of six charcoal drawings on paper, each showing the Funtown Disaster of 2013 at a different angle. If the phrase "Funtown Disaster" sounds horribly ironic, it shouldn't come as a surprise that irony was a large part of Beal's goal in drawing the pictures. Adding to the irony is that Funtown, after surviving Hurricane Sandy in 2012, fell victim to an electrical fire. Is there further irony in that an electrical fire is about the last fire a hurricane would be useful for putting out? How far this can go down the rabbit hole is anyone's guess.

I took a picture of the list of drawings: 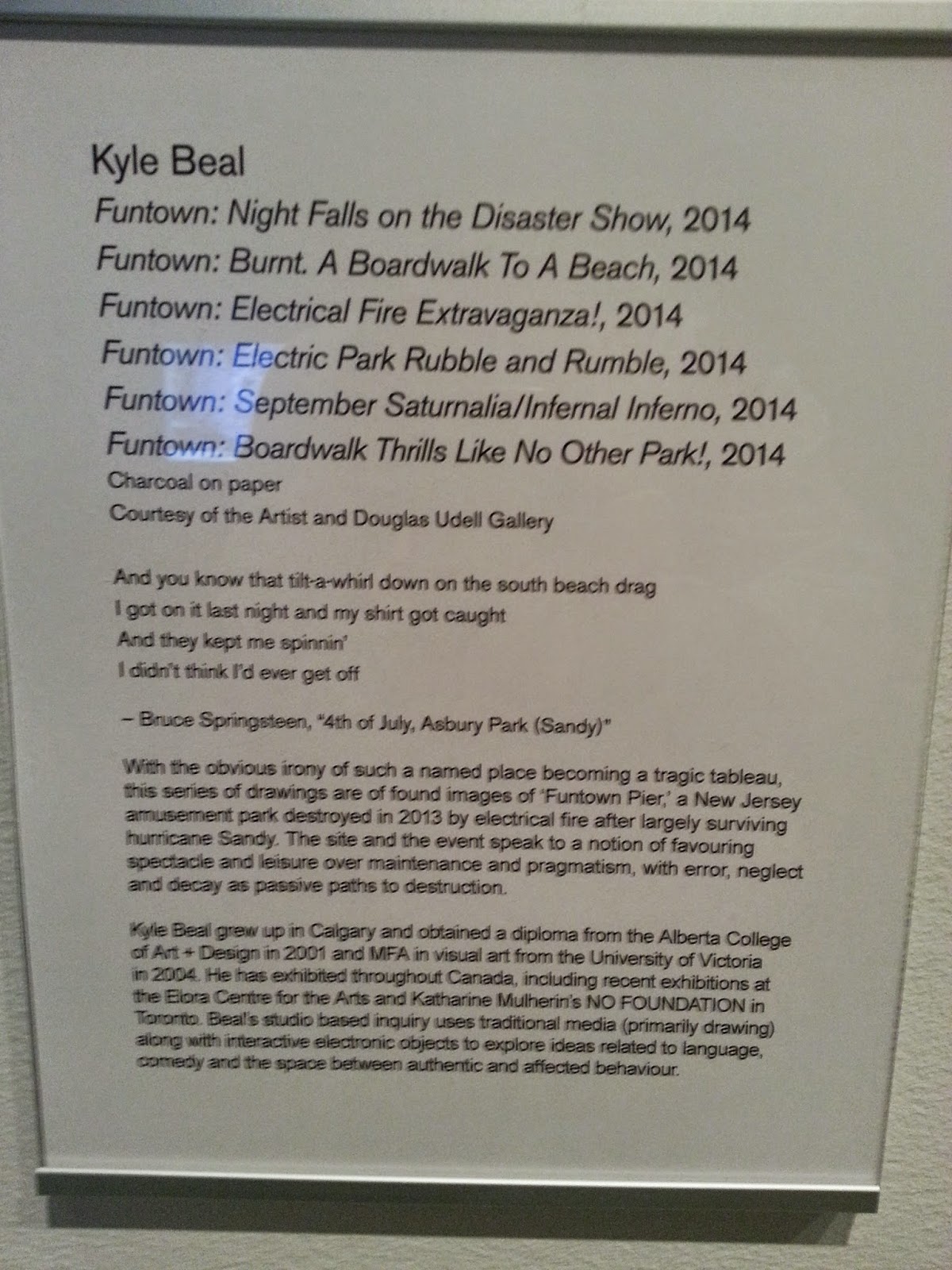 The drawings look like photographs from far enough away. They're really quite remarkable, and are among the best recently made visual art I've seen, Not that that's a huge category, mind you...

I'd fully encourage anyone interested in current art, the tearing down of society, or artistic commentary on the news to check this out. More information is available on the AGA link I posted at the top. Bruce Springsteen fandom optional - for all my love of music, "Badlands" is pretty much the only Boss song I truly love.

Posted by Matthew Gordon at 2:56 PM No comments: