I'm at it again on Amazing Stories!

This time, it's setting-focused. The plot is uncertain until partway through the first part of any story that would be written about the subject.

A genie approaches you with an offer he’s forcing you to take. The offer is this: you have to choose a type of terrain. Your options are forest, plains, desert, beach, or any other you can think of, as long as it’s a type of terrain. (No cities.) The following morning, you will wake up on that terrain at a random spot in the world. Getting home is your responsibility, not the genie’s. You have ten minutes to decide. If you don’t choose something, the genie will choose for you, and he’s a very grumpy genie.
What do you pick?
---

Getting to pick the type of terrain means no ocean dumps. (That grumpy genie might send you there if you don't pick, though.)

The protagonist's decision-making process tells a lot of the story: not only where he or she ends up but also which other characters might appear. For example, I don't think the protagonist will befriend a harp seal in the midde of the Sahara. With so much possible, and so little of the story told before the big event (although the protagonist will have to do some all-weather preparation!), it's a prompt a hundred people can write a hundred different ways.
Posted by Matthew Gordon at 5:43 PM No comments:

Yes, it's late for August's writing prompt. It's never too late to talk about writing, though, and with September's writing prompt coming out so soon I thought it'd be a great opportunity to post a double dose of them.


What if the residents of two countries suddenly switched languages?
Woodland speaks Woodlandian. All its written sources are in Woodlandian, including government documents, archives, reference materials, and even everyday labels like food ingredient labels and street signs. Plainsia speaks Plainsish. All its written sources are in Plainsish, just like Woodland’s are in Woodlandian. One day, every Woodlandian speaker wakes up knowing only Plainsish, and every Plainsish speaker wakes up knowing only Woodlandian. (The few who can speak both languages become poor at both.) No one can read anything unless people from the other country help them.
---

Are these countries bordering, close but apart (think like Belgium and Poland having only Germany between them), or on different continents?

Who would star in this world? Translators, second-language teachers, or people whose occupations don't require them to use words very often?

Would these countries grind to a halt, or would they keep going on visual and kinetic clues? Traffic lights still work fine, and watching enough people and your workplace lift blocks implies you should probably also be lifting blocks, after all.

Would their allies help them somehow? Would enemies try to invade?

The multitude of questions this scenario asks could fill a series.
Posted by Matthew Gordon at 2:54 PM No comments:

The pilot of ABC's Designated Survivor is currently airing. It's the kind of show one would expect Kiefer Sutherland to headline. It's not bad so far, although a certain key dramatic moment could have used more buidup. (Those who've watched it surely know what I mean.)

Something that needs to be addressed is this, whether or not it gets the attention is deserves: 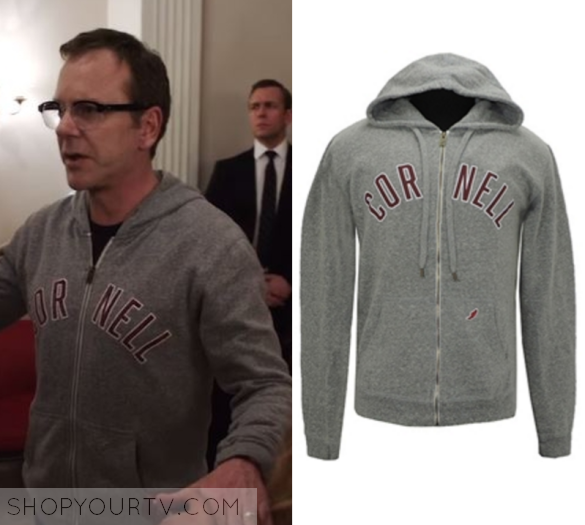 (from Shop Your TV)

Yes, I have the exact same one but in black.

What a Couple Can Be

A very loosely artistic take on one of my favourite recent memories (August 1): 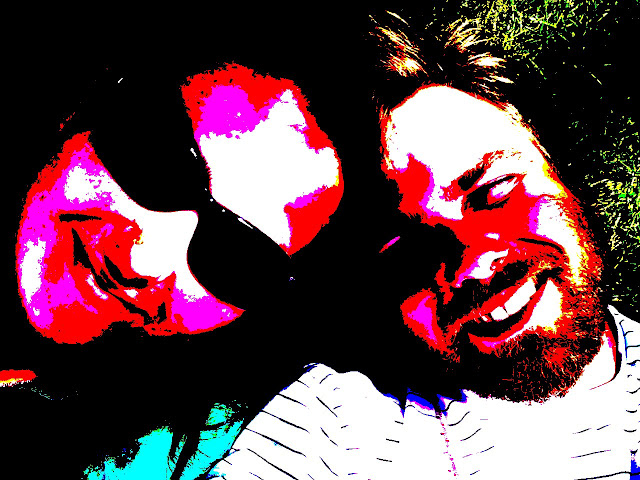 You wouldn't recognize either of us from that picture. That's far less important than the punk-meets-'90s-computer-technology-meets-unexplained-grassy-field-(see-top-right)-meets-classic-comic-book-meets-you-wouldn't-know-this-was-taken-in-Edmonton-unless-I'd-just-told-you feel of this photo. (Unaltered version unreleased.)

It reminds me of a book I've written...

Fun fact: If you let your eyes cross, the grass extends to the top left, which is a nice substitute for the blackness there. You can pretend my hair is a bush that's far spikier than my hair actually is.
Posted by Matthew Gordon at 11:29 PM 2 comments:

Fans of 30 Rock, Saturday Night Live or comedy in general have probably already read Bossypants. Those who haven't probably will. This is Tina Fey's memoir of sorts, released at a younger age than most other memoirs. It's like an autobiography but with about a joke per paragraph.

The book started weak for me. It may be a generational thing; she's kind enough to refer to generations a few times, which reminded me she's 17 years older than I am. When she was a 23-year old visiting a Planned Parenthood for a gynecological exam, (17) I was a 6-year old cheering on my Stanley Cup champion Montreal Canadiens. Maybe that's why I had a tough time finding a lot of her early years funny, especially the college-aged experiences. Once she got into her improv days in Chicago in the '90s, I perked up. Ali Faranahkian's monologue about Big Macs, which assuredly requires his host to buy him one, (83) inspires me to try something similar.

My 30 Rock fandom kept me going and it paid off huge. Off-the-cuff observations like "We were trying to make Viagra and we ended up with blood-pressure medicine" (190) give a vivid idea for how Fey felt about the show's ratings. Insider information like that is more effective than a simple recounting of a show I've watched ever could be. Also, I quite enjoy any time a book breaks from the narrative format to toss informational tidbits at the reader. Fey does that a lot, such as in a textbook-style expository blurb (84-85), or an inset magazine cover (159), or a 30 Rock FAQ. (195-196)

My favourite moments were the ones Fey spent discussing her career in television and her more recent life moments. My working not-at-all-verified theory is that, like radio stations that play new music counterintuitively have more options than radio stations that play older music, her newer memories are less rooted in life-changing moments and more rooted in mundane events. An improv comic like Fey is at her best when the humour feels natural, so being able to draw on anything from a drive on the 80W (246) to playing Scrabble* (194) is a boon. The worst thing for any funny person is to be under a spotlight and be told, "Okay, be funny now." When she gets going about TV or recent home life, Bossypants is hilarious. When she recounts her trip up Old Rag Mountain, I have a far tougher time getting lost in her romantic strife. I, for one, would have called the failed date a success purely based on the mention of Hickory Farms. (61)

Tina Fey is one for self-deprecating humour (see almost anywhere in the book). I'll follow suit. I could have sworn there was something I wanted to reference in this blog entry from either page 44 or page 244 of my edition. Naturally, both of those pages are the plain white pages between chapters. I have now literally drawn a blank.

What surprises me most isn't about Fey or about Bossypants - it's about me. This book came out in 2011, I started watching 30 Rock in 2009, and I've been familiar with SNL basically since birth. How had I not read this yet? To think I actually made time to get through really long and really arcane books first. Well, it's read now. Besides, it's not like I've ever put a book off for way too long before.

*Scrabble is far from mundane, it just probably doesn't quite rank up there in her life compared to, say, being hired by SNL.

NOTE: Bossypants has a large number of short chapters. I love that format for books, even though I don't always use it when I write. It was pioneered in the 18th century, when enough books were serialized it was a necessity. Now, it just makes books easier to read.
Posted by Matthew Gordon at 11:48 AM No comments:

The ID Card Test is a process I use when naming characters. Once I've named the character, taking into account name meanings and name trends, I then think about how plausible yet unique the name is. There's no Princess Virtue Eaglebrook as one of my protagonists, nor is there a John Williams.

Where does that sweet spot lie, in which a character is named uniquely enough to be discernable from other characters and real-world people, yet also plausible enough to be a real name?

Now imagine you're working at a service desk processing ID cards all day. You'll inevitably see thousands of names. Some will be more common than others. Occasionally, one will surprise you.

Lots of names are ones you've never seen before in their first name-last name combinations, yet you're not surprised to see them. This is the sweet spot. These are good character names.

A pop culture example is when Ren & Stimpy creator John Kricfalusi named the famously irritable chihuahua Ren Hoek. Kricfalusi had apparently seen the name on a mailbox and found it sufficiently interesting. He never met the real Ren Hoek, or anyone else named Ren Hoek. It's a believable name, though, having clearly been proven to exist.

In that spirit, here are some character names from my recent works:

I've never met anyone with any of these names. If someone reads one of my books and says "that's my name!", though, I won't be surprised. After all, I have the same name as the protagonist's father in Flowers for Algernon.

Naming characters can be difficult. Luckily, there are millions of options. Getting to a name just uncommon enough for the reader to associate it with the book can be challenging, but can be very effective once you have it.

*Not literally an Arkham Asylum ID card, probably more like a standard-issue health card or driver's license. You have to admit, someone coming up with an Arkham ID is pretty cool, though. I wonder if they're issued to Shoggoths...

**Admittedly, this one is a little on the common side.
Posted by Matthew Gordon at 7:23 PM No comments:

I don't usually reblog things, but Bored Panda's given me a reason to do that today.

Polish artist and architect Tytus Brzorzowski has painted a series of incredible watercolours of how Warsaw looked before its World War II bombings. One key difference: Everything is shifted toward the sky. He's put buildings on stilts, added open-air bridges far above the ground, and made room for streetcars to visit buildings' upper floors.


In his paintings we find narrow, enchanting streets, elegant townhouses and soaring towers. To reduce the shadows of these tight alleys, his buildings rest on towering stilts, creating spaces underneath for pedestrians to stroll. There is just one question: How do you get inside?

Rebuilt Warsaw has a decidedly New World feel, earning it the nickname "City of Skyscrapers" on this message board. I think it looks great - not the "deformed and sealed by the overuse of billboards" Bored Panda reports, although far different from a purely Old World-looking city like Gdansk.

Tytus has an earlier group of watercolours visible on Bored Panda here.
Posted by Matthew Gordon at 8:09 AM No comments: