Citizen Canine is a holistic, accessible look at the history, legality and sociology of mankind's relationship with domestic cats and dogs. From the first wolves who presumably huddled around a campfire for scraps, to the pooches we pamper with dog clothing and expensive baths, Citizen Canine tells it all. David Grimm's examples are journalistic case studies: interviews with animal shelter staff, animal detectives, members of the animal rights movement, and others.

Citizen Canine's greatest strength is Grimm's telling of the modern animal welfare movement through the stories of its advocates. Rescuers at organizations like ARNO, which rescued dogs in the wake of Hurricane Katrina, are instant heroes whose experiences are directly linked to current events. Hector Sanchez, an LAPD detective who focuses on animal cruelty, is someone who can explain the very real link between animal cruelty and serial killers.

Then there are animal rights. The Animal Legal Defense Fund has bravely taken on winning and losing cases in which animals' voices needed to be heard, yet many of its members ascribe to philosophies, like veganism, that I respect but don't embrace. David Favre, who admittedly makes me think of Brett Favre, is a professor who raises animals, and occasionally slaughters them, realizing that sometimes, slaughter is the most humane option. For example, "fly strike", a fatal disease involving maggots being embedded in an animal, is prevented by killing the animal for food. (277-278)

The question of animal personhood is one that anyone could spend countless hours contemplating. Animal rights activists throughout Citizen Canine compare the advancement of animal rights to women's rights and black rights. The logical conclusion, one line of thinking goes, is that animals could sue each other, vote, and do everything else people do. The problem from my perspective then becomes that animals can't legally enter into contracts. You can let a dog or a cat live in an apartment, but you can't rent to an animal. Is a pawprint a signature? Animals could have litigation guardians,* of course, just like children or the severely disabled. If someone acts as guarantor for Fluffy's bank loan, though, isn't the loan really just made out to the guarantor, with Fluffy inserted into the loan contract superfluously? What, for that matter, is valid as an animal's will? Could Fluffy bequeath his toys to the neighbour's kitten? Grimm does a very good job of describing animals' rights in criminal trials, (179) divorces (140-141) and tort cases. The problems lie in areas of law that no one seems to have explored.

Here's my dog, Ory, demonstrating that he too is a citizen canine: 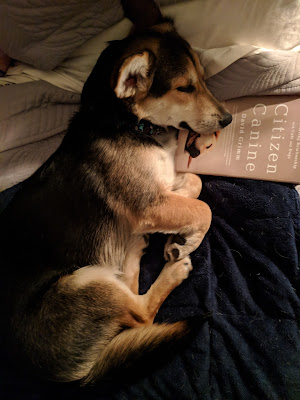 This review is accidentally very timely. The modern adoration of domestic cats and dogs in Citizen Canine is through an American lens. The winter Olympics are currently in South Korea. According to Humane Society International, and subsequently reported by CNN, 170+ dogs were bound to become meat before they were rescued a mere 2-hour drive from the Olympic Stadium in Pyeongchang. A book that focuses so much on the inner workings of the animal welfare movement feels like a fitting subject.

Historical background can be some of the most dangerous educational material because unlike a dedicated history text, which is meant to be the subject of academic grappling, "background" is more or less meant to be taken as fact and then shuffled out of the way so the important material can continue. Grimm states that "[Medieval] Europeans didn't do themselves any favours by eschewing bathing and emptying their chamber pots into the streets." (46) However, the myth that medieval Europeans didn't bathe has been debunked so many times it is inexplicable why Grimm would hold to it. Grimm also makes a blanket statement that cats were ill-treated in the Middle Ages, largely on the strength of Pope Gregory IX's Vox in Rama (1233), yet Vox in Rama was published over two thirds into the Middle Ages, and Grimm doesn't account for the numerous depictions of happy pet cats in art of the supposed anti-cat era. Most of Grimm's information on medieval cats comes from Donald Engels's Classical Cats, which from my brief skim appears to mainly discuss medieval cats when they were involved in paganism rather than on a more wide-reaching basis.

As the pet world expands, people are thinking beyond cats and dogs. Ferrets, rabbits and other small animals have burrowed their ways into our hearts. There's apparently even an emotional support tarantula kicking around. Hopefully someday, there'll need to be a sequel to Citizen Canine covering these less common animals. Patrician Piglet? Inhabitant Ibex? Inquiring eyes would like to read.

*This is also called a "litigation representative" or a "guardian ad litem" depending on your jurisdiction.
Posted by Matthew Gordon at 9:03 PM No comments:

I don't usually repost news stories, but when I do, I swear there's a good reason for it. (Usually involving wildlife, whether urban or rural.)

This time, police in Peterhead, Aberdeenshire, Scotland received the concerning alert that a tiger was in someone's cowshed. (AP) (The Cut)

Here's a picture of the offending tiger, from the Cut story referenced above: 
Police in Scotland were called by a farmer who thought a big cat had invaded his cow shed. They ended up in a 45-minute standoff with a large stuffed tiger.

Police thought they had the tiger by the tail when they were deployed to a farm in Peterhead in Aberdeenshire, sending in a number of units, including an armed response team. The authorities eventually realized it was a toy.


The police had a 45-minute standoff with a plush tiger.

No one was injured, and I can't imagine the tiger will face trespassing charges.
Posted by Matthew Gordon at 8:00 AM No comments: