April's Book: The Years of Rice and Salt

The Years of Rice and Salt is a highly ambitious alternate history. In 763 pages (approximately 240,000 words), Kim Stanley Robinson recreates the last 700 years of world history as if the Black Death had wiped out 99% of Europe's population. In Robinson's vision of an effectively Europe-less world, various Islamic civilizations and China assume dominant roles, including those of discovering the Americas. Later, Indian and Japanese confederacies vie for power, as well as the North America-based Hodenosaunee League. Robinson's characters are reincarnated through the ages, their names conveniently always starting with the same letter: B and K for the deuteragonists, and then a third main character I. Any K is strident and strong-willed, whereas any B is a voice of stability and restraint; I is a supporting figure that lends a thoughtful helping hand.

Such an undertaking, naturally, is split into ten sub-books ("books"). At the end of many of them, the characters reconvene in the bardo, although as time wears on, the real world and the bardo merge. Robinson uses numerous calendars, but most notably, any given year can have 621 added to it (to coincide with Mohammed's revelations in 622) in order to figure out when the events happened in the Western calendar.

The ten books fly around the globe but always go forward in time. In Awake to Emptiness, Bold is a scout in Tamerlane's army who discovers a depopulated Hungarian village shortly after the Black Death. This opening scene is stark, gritty, and the most exciting part of the whole book. Bold later meets Kyu, a slave boy in Somalia, where they travel medieval Asia on one of Zheng He's ships. Bold and Kyu's trip to the bardo at the end of the book is a shocking, fun way to transition toward the rest of The Years of Rice and Salt. The next book, The Haj in the Heart, starts with K's continually thwarted attempts to overthrow the local order, including as a tigress, before the philosopher Bistami travels from India to Mecca to what would have been Bordeaux. This is the only book in which a major character is a non-human, and the only one in which the hierarchy of reincarnation makes the reader seriously wonder whether the characters will end up in Hell. These are my two favourite books, largely due to how action-packed they are. As much as they sold me on The Years of Rice and Salt, I felt sad at the end that I had experienced the best parts 188 pages into a 763-page book.

Ocean Continents and Warp and Weft can be considered together. Each is a "first contact" story outlining what Chinese and Japanese colonial encounters with indigenous North and South Americans could have been like. I would have loved to have seen these each be twice as long, possibly as the expense of the two longest books (see lengths below). The "first contact" story in a Europe-less world is fascinating considering how much of our globalization narrative is shaped by European explorers' and settlers' journals. A Chinese or Japanese journal would have been a gem. The Alchemist takes place in contemporary Samarkand, and although its philosophizing occasionally gets in the way of the action, the main character Khalid's rush toward scientific discovery after losing his hand for a fraud conviction makes the reader feel like time really is moving forward. "The Alchemist" also centers importance on Central Asia, which will become a battleground as time wears on...

In Widow Kang, Robinson moves back to China, where Kang Tongbi and her second husband Ibrahim attempt to reconcile Buddhism with Islam. There is more philosophizing, but Robinson also focuses on the harrowing journey Kang and Ibrahim take away from the heart of Chinese civilization, into the dusty plateaus where they will have to discover themselves. Robinson made "Awake to Emptiness" come alive in part by using a Journey to the West-style storytelling style. It is surprising that he did not try to make "Widow Kang" match Dream of the Red Chamber. The Age of Great Progress opens with the storming of Travancori (Indian) ships at Constantinople, showing the growing ascendancy of the Indian Subcontinent and the rivalry it builds with Dar al-Islam in advance of the great war that is to come. The rest of the book focuses on the Industrial Revolution within Travancore, which has the irony that one of the United Kingdom's most notable colonies in real life should industrialize the soonest in the alternate world. The English are even mentioned, albeit in the form of the Sultan of Constantinople having a breeding program to maintain the recessive pale skin, red hair and blue eyes of the specimens.

The War of the Asuras is Robinson's crack at the World Wars, in one 67-year go, as "the Long War", primarily between China and Dar al-Islam. Travancore, Japan and the Hodenosaunee League are kingmakers in this global conflict that cannot truly produce a victor but that, like the real World Wars, leads to a mountain of casualties. It is the shortest book in The Years of Rice and Salt, which is a shame because the subject matter is fascinating. If there is anything I dislike about it, it is that the global warring all occurs in one long war, meaning there is no time for an interwar book. The interwar period was so fascinating in real life, a reader can only imagine what Robinson could have done with it. Its particular blend of the bardo and the living world is my favourite as well, when characters start questioning whether they are alive, Waking Life-style.

Nsara is set in Firanja (Europe) after the Long War, in what would have been the present day (2002, as that is when The Years of Rice and Salt was released). It follows Budur, a young woman from Turi (in real-world Tyrol) who settles in Nsara (in real-world coastal France), where Kirana becomes her professor and lover. The depopulation of men due to the Long War has resulted in an upswing of feminist thought, including regarding the causes of the Long War. There is also a conference in Isfahan, Iran to stop atomic bomb research, which causes a renumbering of the calendar to start at the date of the conference. The First Years moves back to China, this time in the new calendar, which sees K once again seek to overthrow the government, and B become a wise teacher... how much has changed in 600+ years?

If all of this gets confusing, here's a timeline, including which of the characters and settings are modelled on those from real life.

The books are, in order:
The Years of Rice and Salt is very much an intellectual history, contrary to critics' assertions that it is a social history. Robinson is very little concerned with the development or experience of architecture, poetry, food, music, municipal planning, visual art, or any of the assorted little joys that make worlds real. That is no knock against the book, as it does not need any of those to function. What it does have, that most social histories do not, is a beautiful map at the start of each book. These are very helpful, and are constant reference points.

The world is such a vast place, and history is so long, that if anything, Robinson could have included more civilizations. Most strikingly, Robinson's prognostication that a general European plague would have all but annihilated Christianity ignores those notable Christian civilizations that weathered the Black Death in our timeline. Within Europe, Eastern Germany and Central Poland went virtually untouched by the Black Death. Robinson neither mentions Germany or Poland at any point nor explains why his version of the Black Death would not only be greater in potency, but also expand farther geographically. Outside of Europe, Ethiopia had been one of the most powerful kingdoms in Africa for centuries by the time Bold and Kyu arrive near there, yet it is never mentioned. Similarly, Armenians are mentioned as ethnic minorities in the Ottoman Empire and elsewhere, yet their Christianity is never mentioned. Christian remnants would have made for fascinating characters - could B and K have been, at some point, incarnated as Bolesław and Konrad, or as Beata and Katrina?

It is also unclear why, out of all wars Robinson's timeline could have re-enacted, the World Wars would figure so prominently. The farther after the alternate history starts, the less likely an event should be to resemble our timeline, yet 20th-century wars (right on down to trenches, poison gas and discussions involving an atomic bomb) are in The Years of Rice and Salt. Where is Robinson's Thirty Years' War or Seven Years' War? Why is there no Robinson version of Charles V or Louis XIV? Again, there are space constraints. The Years of Rice and Salt could have realistically been two books at its length.

Nonetheless, The Years of Rice and Salt is a fantastic read. Its first half kept me the most riveted, and Robinson is at his best when keeping a book under a hundred pages. I was sad to see the book end, though. I want to see Bold and Kyu reach nirvana!

*I usually use pinpoint page citations for books of this type. However, in the case of a book as intricate as The Years of Rice and Salt, I could cite nearly the whole thing for some proposition or another. The sub-book names, settings and character names change so often that each event's place in the book should be evident.
Posted by Matthew Gordon at 9:50 PM No comments:

I have over 1,300 answers, in such varied topics as History, Literature, the NFL, the NBA, Zootopia, Law, and Industrial Relations. 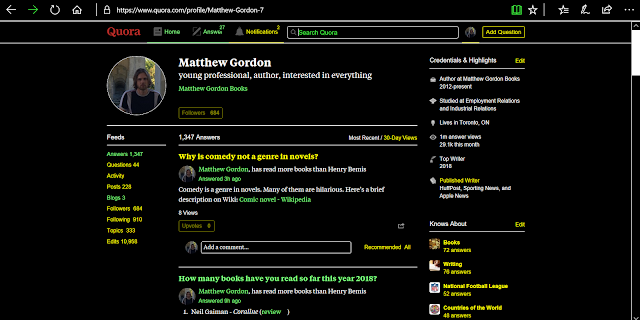 Fittingly, this blog is featured on my profile, as well as my January 2018 Coraline review in one of my answers.