Shakespeare and Me: The Tempest, and All the Rest


This was well done, my bird.
Thy shape invisible retain thou still:
The trumpery in my house, go bring it hither,
For stale to catch these thieves.

Yesterday, I finished reading The Tempest. It's the first Shakespeare play I'd read since 2010, which is the longest I've ever gone without reading one except from birth until age 14. I've spent the intervening years doing a fair bit, including a lot of reading, so I don't feel like I've cheated myself. It was just a nice time to return.

It's pointless and unfair to review a Shakespeare play the way I would review a more current and less already discussed book. What am I supposed to say? That it's great, which would be stating the obvious? That it isn't, which would be impossible to defend?

What I can say are four things:


Semi-related, I have a plush tiger I've owned for the vast majority of my life (since I was 8 or so?) that I named Tempest. He doubles as a puppet. Here's a picture of the cute little guy: 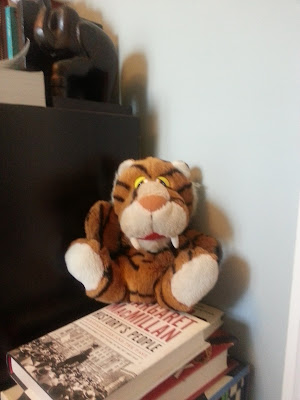 A full list of Shakespeare plays I've read (13 in total, or 15 if you count the two I mention at the end):

I also read some of his sonnets in 2009. I vaguely recall reading Coriolanius* in 2007 and Measure for Measure in 2009, but their contents elude me to the point that I wouldn't feel able to discuss them.

Fun fact about me: Titus Andronicus is my favourite Shakespeare play.

*This is what happens when you take a course entitled "Shakespeare's Tragedies and Histories". Bizarrely, none of King Lear, Macbeth or Othello were on the syllabus.
**I read these within a couple days at the start of August. Loyal readers of this blog know my birthday is August 3, so imagine this: every year, right before my birthday, I try to accomplish as much as I can while at my current age. When I was 22, that apparently meant reading as much Shakespeare as possible. It also means that even though my Shakespeare drought lasted barely more than six years, I read The Tempest at 29 but the ones before it at 22.
Posted by Matthew Gordon at 3:06 PM