One of the core mandates of Matthew Gordon Books is the analytical approach to fiction and non-fiction, which I try to read in roughly equal amounts, such as when I read 26 of each for the venerable Book a Week. One of the more peripheral mandates is my lifelong interest in the National Football League. Sometimes, that even devolves into statistics.

Here are two extraordinary NFL statistics, one from non-fiction, one NFL.com accidentally made up:

Right before the 2019 season, I noted on Quora that if the Chiefs started the season 5-2, Andy Reid would have the same lifetime NFL head coaching record as Marty Schottenheimer (200-126-1). (Even the same number of ties!) Moreover, Reid would achieve that record as head coach of the Kansas City Chiefs, which Schottenheimer famously took to multiple first-round byes back in the 1990s.

Thanks to Thursday night's 30-6 victory over the hapless Broncos, the Reid/Schottenheimer prophecy is fulfilled.

Fiction: The Lions led the Vikings 7-1

When the Vikings scored their first touchdown of today's game, the NFL.com Gamecenter of the game recorded the extra point but, through some glitch or human error, failed to record the touchdown. The result was this: 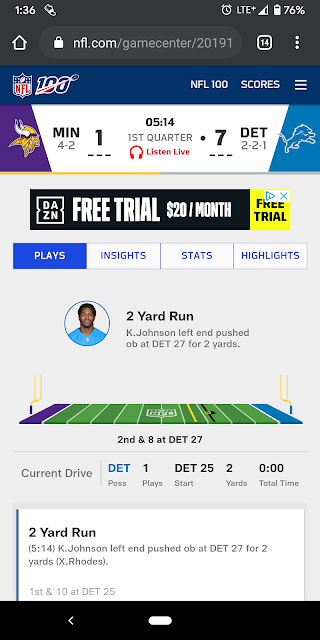 Depending on who you listen to, it is either impossible for a team to have a score of 1 in an NFL game, or so unlikely it's never happened. Today was not an exception.
Posted by Matthew Gordon at 11:54 AM No comments:

Available for sale in print for $15 from High Shelf Press (bundled discounts available) or from Amazon.


Among other great artists, Issue XI features my short story "The Aviary", in which predators and scavengers engage in a war of words (war of birds?) over who gets to eat the big catch. The birds within are markedly more majestic than this guy I snapped, I assure you.

You can find a full table of contents here.

You can read the issue online in journal format here.

The NFL stadium in Tottenham Hotspur is the first NFL-designed stadium outside of North America, as per Melissa Stark. Today, it hosts the Carolina Panthers and the Tampa Bay Buccaneers, which is the first division rivalry game in that stadium. (Last week's Chicago/Oakland tilt was a game between two vintage NFL franchises, but two that have never played in the same conference, let alone division.)

I went to London for the first time this past summer. I took over 900 pictures in eight days, including Westminster Abbey (just the outside!), the iconic statue of Richard I in front of the House of Lords, and the original 1854 dinosaur models at Crystal Palace.

I've been cheering on the Panthers since their inaugural season in 1995. Now I get to cheer them on in the shadow of this: 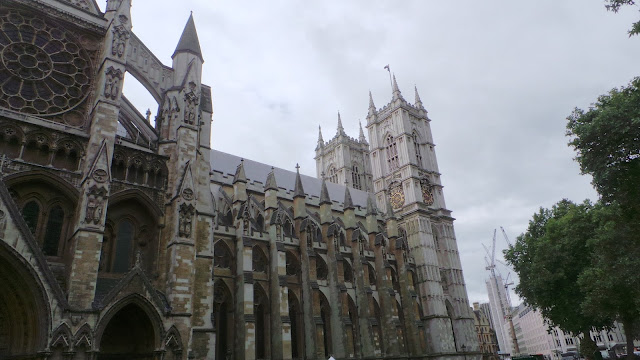 As someone who is such a big Panthers fan I wear my Panthers hoodie to a Guns 'N' Roses concert, I couldn't be happier.
Posted by Matthew Gordon at 6:57 AM No comments:

A doctor took pictures of my lungs. They were full of snow flurries. (3)

From Nic Pizzolatto, the creator of HBO's True Detective comes his first novel Galveston. The story is told from the voice of Roy "Big Country"* Cady, a mercenary/assassin diagnosed with lung cancer in the book's first two sentences (referenced above). With what he thinks is a short time left to live, and with his old colleague Stan Ptitko determined to make that time even shorter, Roy embarks on a journey that is part-escape, part-revenge. He is accompanied by Rocky, a teenaged prostitute he rescues after the book's opening conflagration, and eventually Rocky's little sister Tiffany. Ironically, Galveston takes place in some of the hottest parts of the Continental United States, yet Roy compares his cancer to snow.

No character in Galveston is particularly lovable, although it's difficult to dislike toddler Tiffany. Roy earns the reader's sympathy through his sardonic humour, extreme levels of pragmatism, lack of regard toward any traditional obligations, and the fact that he isn't any of the other characters. Roy is a cross between the Punisher and someone engaged on a long road trip in the South with unlimited drinks, especially Jack Daniel's, Jim Beam and J&B. When Roy murders people, he always finds a way to paint it either as self-defence (19) or as something that happened so quickly it was the only logical course of action. (234) Roy cares about Rocky and especially Tiffany, and seems genuinely willing to help people in trouble, but is otherwise emotionless about his surroundings, including rejecting Rocky's sexual advances even before he learns Tiffany exists. (44)

The book's main events occur in the late '80s, with the future "present" when Roy tells the story being 2008.** Conveniently, the story occurring in the pre-smartphone era makes characters evade each other more easily. When a character is not physically in front of Roy, the reader has no idea where that character is, or whether he or she is even alive. This sense of disappearance adds to Galveston's mystery; much like in the original Warcraft computer game, when you haven't discovered a piece of land yet, it may as well not exist. Feeling that way in a fantasy world is understandable, but when the hidden place is somewhere as obviously existent^ as the Southern United States, a fog hangs over the entire setting. When Roy leaves his motel room after rejecting a prostitute's advances, continuing his tradition of apathy toward sex, he reflects on how literally in the dark he is about his future: "You steer down lightless highways, and you invent a destination because movement is key." (155) The future Roy finds is as a sixty-two-year-old ex-convict with one eye and a dog, who lives a quieter life than he could have imagined in the '80s.

My one qualm with Galveston is the use of the "knocked unconscious with no lasting damage" trope, which is disproven by science once every few seconds. Any unconsciousness lasting longer than a few seconds has disastrous effects on the neural system,^^ yet Roy's head is treated like a pinata, only for his brain to function normally a couple pages later. (226-228)

Unlike many of the other books I discuss here, Galveston is a blisteringly fast read with a simple story Pizzolatto conveys well. There is very little subtext, obscurity, theorizing, or questioning of what reality means; what you read is what you get.

A personal note: when I lived in Houston briefly on a work assignment, my parents visited me for a weekend. During that weekend, we went to Galveston. It was 2011, the year after Galveston was published. When Roy drives Rocky and Tiffany to the Gulf Coast, lending the reader an idea of how Pizzolatto picked the book's title, he notes the wide-open possibilities envisioned by the drive down the I-45 to Galveston: "Clear of the cities, Texas turned into a green desert meant to hammer you with vastness, a mortar filled with sky. The girls treated it like a fireworks show." (79) While we certainly had a better time there than Roy did, Pizzolatto's descriptions of the Gulf and the beaches took me back there. I might not have picked this book to read if the title didn't bring back those memories.

*No resemblance to Bryant "Big Country" Reeves, retired centre for the (as they were then) Vancouver Grizzlies.

**Although I suppose this fact spoils that Roy survives the story, it's impossible to discuss the book's 2008 scenes otherwise.

^The word "existent" is used not nearly as often as its antonym "non-existent". Why, I've never learned. Perhaps things are assumed to be existent unless we hear otherwise.

^^A similar error is made in Richard Matheson's Somewhere in Time, also told from the perspective of someone with terminal cancer.
Posted by Matthew Gordon at 7:57 AM No comments: