RateYourMusic vs. Goodreads: A Comparative Analysis

One of my favourite social media sites is RateYourMusic. I've rated over 2,300 albums, and over 300 movies (2,323 albums and 310 movies as of May 14, 2018). A significant portion of the album ratings date back to my nearly lifelong love of all things metal, but my collection is eclectic.

On August 27, 2013, I created a Goodreads account. Then I did nothing with it. This morning, I received notifications asking me to sign up for the 2015, 2016 and 2017 reading challenges. (I assume I lost them.) Naturally, I addressed the 4-month old notification to sign up for the 2018 reading challenge, listing 20 books. (More than Book a Month, but not quite Book a Week.) I then attempted to do a rating blitz, essentially a huge number of ratings all in one go in order to establish that yes, I have read a lot of books.

One of the benefits of RateYourMusic is exactly what it says on the tin: rating music. Community aside, what you're there to do is enter numerical ratings into a gigantic database that covers, hypothetically, all recorded sound. Realistically, the community focuses on classic rock, hip hop, indie rock and metal. Many popular albums have thousands of ratings, all of which aggregate into an overall rating. That overall rating isn't always accurate, but usually, it gives you an idea of how critically acclaimed an album is.

Recorded sound is so recent, though, and popular music that we think of as popular is even more recent. My grandfather (1918-2011) owned 78s. The album as we know it is a creature of the '60s and beyond.

Books go back a long way.

As soon as I started rating books, I realized:

I'd be curious about the idea of porting my music rating ideas to my favourite medium for years. Now I know.

Thankfully, my "Ease of Reading/Educational Content" system on here avoids having to figure out books' merits. Instead, it seeks to answer the age-old question: is the author doing what he or she intended to do? I'm also willing to bend the definitions of "ease" and "education", but only sometimes.
Posted by Matthew Gordon at 8:54 AM No comments:

This is my second Orson Scott Card review on this blog. The first was Ender's Shadow, all the way back in June 2012. This is the first book for the Alvin Maker series I've reviewed, in large part because it's the first one in the series and the first one I've read.*

Seventh Son takes place in an alternate history of the United States of America in the 1700s-1800s in which the US had only started, and in which the folk magic of the time is all real. "Heartfire" is the idea of there being fire in our hearts/souls, taken literally, allowing Peggy to track people using an early modern heat sensor. Out-of-ordinary, or out-of-body, events are debated: are they from the devil, or simply inaccurately reported? England has a Lord Protector (9), suggesting that perhaps the Restoration under Charles II never occurred, although there are Crown Colonies as well. The map at the start of the book shows just how different the US could have been.

Throughout Seventh Son, characters search for meaning. Among Card's wittier moments - and there are many of them - is when Taleswapper explains his journal entries to Alvin Miller Junior, the series's protagonist, and one of them is from Benjamin Franklin. Franklin's greatest achievement, in this world, is the creation of the word "American". (154-155) The idea that a word can unify people is one of Taleswapper's most powerful observations.

Much of that meaning comes through conflict between the drolly named preacher Philadelphia Thrower, of Anglo-Scottish origin, and the Millers. This symbolizes a conflict between paganism and Christianity generally, at least in Seventh Son's versions. "Paganism" generally, the agglomeration of beliefs and superstitions various characters hold, is placed in stark contrast to Christianity... until suddenly it isn't. Alvin Junior has an experience like breaking the ridgebeam: is this the work of the devil, or a simple coincidence? If a preacher like Thrower says it is the former, he vindicates the "pagans'" beliefs. If it is the latter, how did it happen? The sparkled snakelike beast that visits Thrower as "the Visitor" later in the book complicates matters further. Most mainstream Christian faiths would assume Thrower had been sleep-deprived when he saw the beast, yet another character, named Armor of God(!!!), sees the beast as well. Throughout Seventh Son, the combination of frontier, faith and fantasy constantly bends reality.

Fear of the unknown expands into the constant worry that "Reds" (meaning to be an intentionally archaic term for Native Americans,** although I had initially thought they were communists) would scalp anyone who ventured into the woods at night. Those scalps would then be traded to the French for metal. Why the French would place monetary value on scalps is something no character is able to explain - which immediately calls into question whether it's even happening. Indeed, not a single "Red" or Franco-American is ever seen in the entire book. Tales like these force the reader into the unknown-ness of the American frontier, where every tale can be believed or disbelieved. By the end of the book, Alvin Junior possessing magical power becomes more realistic than the French holding ill intentions toward Anglo-American or Swedish-American settlers.

Yesterday, when I was walking by High Park, I saw a sign that appears to immortalize the book's iconic opening scene: the Millers' horse-drawn carriage nearly sinking in the river. Alvin Miller is a seventh son, and his wife Faith is pregnant with what could be the Millers' seventh son. That makes Alvin Junior a seventh son of a seventh son: the powers this confers upon him are vast. Alvin Senior's eldest son, Vigor, aids greatly in helping the carriage out of the river. During my walk in High Park yesterday, I came across this sign: 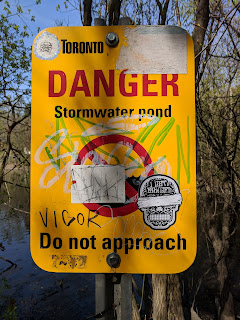 Had the person who wrote "VIGOR" on the sign read Seventh Son? I certainly hope so.

Seventh Son is a page-turner, yet like while I read Card's classic Ender's Game so many years ago, I never stopped thinking.


*The edition I own, found here, also includes the 1988 sequel Red Prophet. I have not yet read Red Prophet due to the Book One Effect.

**In Canada, where I live, we would say "First Nations".
Posted by Matthew Gordon at 3:11 PM No comments:

The Book One Effect

This is the first in a series of musings I'll be making over the next month or so on reading, writing, and the cozy little place I've carved out for myself in the literary world. It's fitting that the first post of this month is The Book One Effect.

I am statistically extremely likely to read a disproportionately high number of Book Ones of any given series.*

How does it happen?

My unofficial but very firmly held requirement for this blog is that I don't review multiple books by the same author in the same calendar year. The reasoning behind this is simple and elegant: there have been thousands of great authors in English-language** history, and they all deserve a turn. It's all so grade school-ish. This rule is usually beneficial, although it's currently having the annoying side effect of making me delay any review of Neil Gaiman's American Gods until 2019 at the earliest, as I reviewed Coraline back in January.

Is it a good thing?

Overall, I think The Book One Effect is something to celebrate. It makes me intimately involved with various iconic characters' origin stories. It also forces me to consider parts of series as standalone novels. Asking "could this part of the franchise pull its own weight?", outside of simply being an X-Brand book, is a good start for a lot of pop cultural literary analysis.

Notable examples include:
I don't have a notable counter-example. Maybe this is a sign that in a post-Archie McNally, post-Harry Potter, de facto post-A Song of Ice and Fire world, I'm not meant to read series. I kind of like that. It forces me to see something different in everything I read.

*This may be the most adverbs per line of any sentence I've ever written.

**For whatever reason, I've never thought to read a book in French for this blog. I may dabble in some Polish at some point, though.
Posted by Matthew Gordon at 6:14 AM No comments: